On May 18, TRON was invited to attend the donation delivery ceremony hosted by the Busan Blockchain Industry Association in South Korea. Justin Sun, founder of TRON Foundation, donated $200,000 to the association, to support its efforts in building and expanding the global blockchain industry ecosystem. 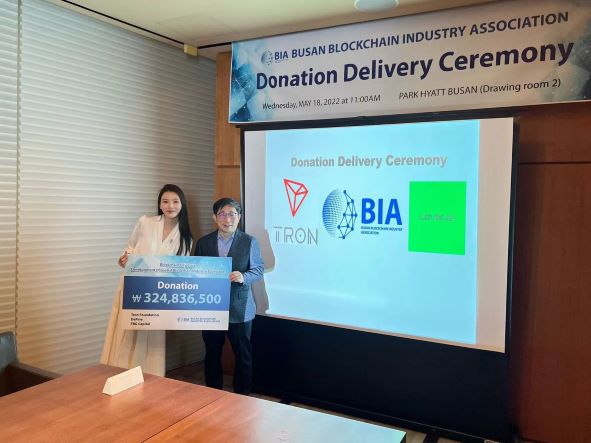 Companies and organizations from the blockchain space, including TRON, LEVEL19, DeFine, and FBG Capital, were invited by the Busan Blockchain Industry Association to this event. Since last year, the city of Busan has been spurring blockchain growth through a series of moves, such as hosting an NFT conference and building a blockchain industrial complex. Park Hoon-ki, Director General of the association, commented to the media, “The donation delivery ceremony served as an opportunity for the Busan Blockchain Special District to expand exchanges with global blockchain companies one step at a time.”

“In Asia, where the blockchain culture has not blossomed compared to the western world, the global cooperation of Busan City and various new attempts on blockchain and NFT such as Budlers are very meaningful,” said Sun.

Sun, an essential proponent of this event, is a prominent blockchain entrepreneur who founded TRON in 2017. After four years of growth, TRON has seen over 93 million on-chain users and 3.2 billion transactions in its ecosystem. In December 2021, the TRON network became fully decentralized and was restructured into the TRON DAO community, the largest decentralized autonomous organization (DAO) in the world.

Sun’s support for the Busan blockchain industry is among his many moves to facilitate the global growth of the digital and crypto worlds.

The recent launch of the decentralized stablecoin USDD by Sun has garnered industry-wide attention. Amid the market downswing triggered by the collapse of UST and Luna, USDD bucked the trend, and its total supply has exceeded 300 million. Alameda Research and Amber Group, among others, have joined as the members and whitelisted institutions of the TRON DAO Reserve. And TRX is now one of the few cryptos that registered overall growth in the down market and now rank 14th in the crypto market by market cap.

At the end of 2021, Sun was officially appointed by the government of Grenada as its Ambassador and Permanent Representative to the WTO and was authorized to represent Grenada at the WTO meetings during his mandate. He said he would proactively promote the integration of cryptocurrencies and sovereign states to build a new financial system that is secure, efficient, and inclusive. In the meantime, he would also leverage his experience in the digital currency field for a joint response to the new challenges regarding digital transformation in the post-pandemic era.