Pop-up shop stunning Hainan, Fenjiu recreate the international point of explosion event in the Spring Festival of the Year of The Tiger! 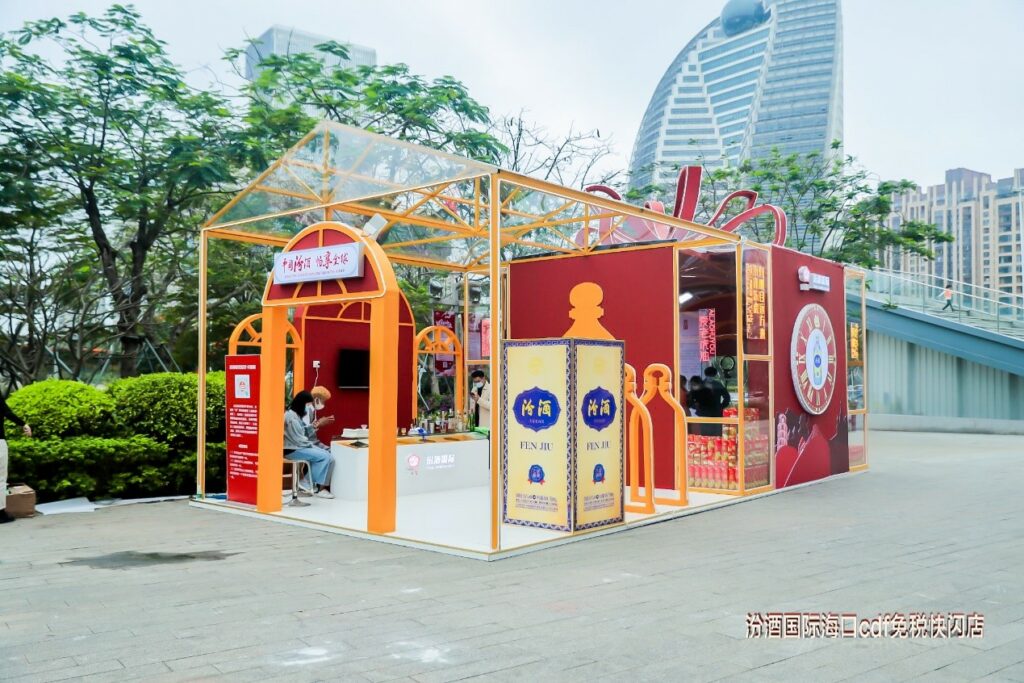 From January 25 to February 8, the pop-up shop with the theme of “Fenjiu, The Spirit of China, Enjoyed by The World” was firstly held by Shanxi Xinghuacun Fenjiu International Trade Co., Ltd. in Haikou Riyue Square Duty Free Shop, Hainan Province of China. 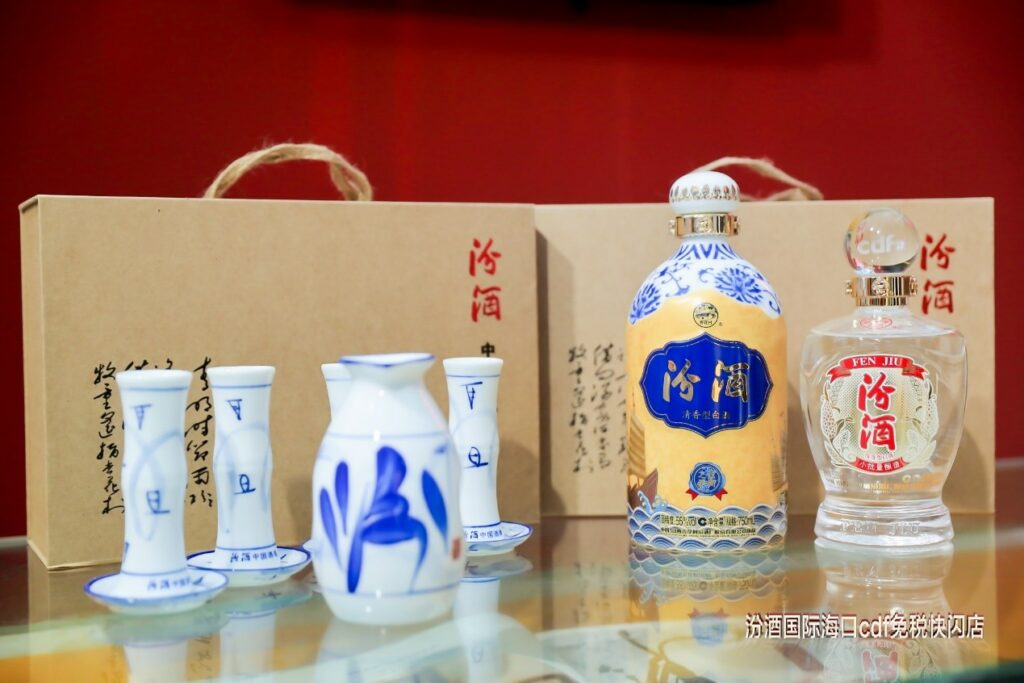 With elegant flavor, the host let Fenjiu accurately communicates with consumers around the Spring Festival in the year of the Tiger, and promoted the booming sales of Fenjiu in the Spring Festival market with explosive events, presented a brand experience full of new ideas, let “International Fen” taste for more people through the pop-up shop.
With the help of Hainan, a hot land for reform and innovation, Fenjiu has blossomed international strength and potential with its quality and cultural charm. The event let Fenjiu touch thousands of consumers, indicating that Fenjiu will create more beautiful for people, and create a new brilliant future in the market in the new year.

Hainan is a special zone at the forefront of China’s reform and opening-up. As the largest special economic zone in China presently, Hainan has the unique advantages of comprehensively deepening reform and experimenting with high-level opening-up policies. With rapid development and construction, Hainan attracts people from all over the country to travel, live and start businesses.

In 2021, Hainan Free Trade Port was established, which has become a new consumption landmark to promote better connectivity between domestic and international markets, two-way flow of commodity factors. New fashion and new life emanate from here and interact frequently with the Pearl River Delta and Yangtze River Delta. It not only affects China, but also radiates to a broader region. Hainan has become an important intersection of domestic and international circulation, and stimulates the market power of enterprise innovation and development.

The director of Shanxi Xinghuacun Fenjiu International Trade Co., Ltd. said that the event was launched in the form of pop-up shop in Riyue Square Duty Free Shop, taking Hainan as the link to further strengthen communication with consumers at home and abroad. So that more possibilities of Fenjiu will be explored, to make more Fenjiu drinking scenes, to let more domestic and foreign tourists understand Fenjiu, even become the disseminator of Fenjiu reputation.

In addition to the areas displaying the internationalized products and achievements of Fenjiu, there was an area of “Fenxiang Cocktail” in the pop-up store discussing the innovative drinking ways of Fenjiu, breaking the boundary of international consumption, and also breaking the traditional impression of consumers on Baijiu.

For the international pop-up shop decoration, Shanxi Xinghuacun Fenjiu International Trade Co., Ltd. adopted Hollywood-style brand story narrative style, innovated and integrated tourism interactive scenes, and tried brand social interaction. Three punch points were set up in the shop, respectively “Fenxiang Cocktail”, Research Institute (receive the research report on the internationalization history of Fenjiu Culture, then give the correct answer to the question, that is, punch in successfully), and 360° Shot area (with the topic #Fenjiu, The Spirit of China, Enjoyed by The World to participate in the online lottery). Finish the collection of 3 stamps of 3 punch points, consumers can receive cultural gift.

The reporter saw at the scene that since the pop-up store was opened, it has continuously attracted consumers walk into for the experience. Many consumers expressed recognition of this refreshing brand experience and also actively participated in the punch points.

Industry insiders believe that Fenjiu pop-up stores made an amazing appearance during the Spring Festival, releasing the diverse charm of Fenjiu in the in-depth interaction with consumers, and showing the representative image of Fenjiu on behalf of Chinese liquor to the international through the international communication history of Fenjiu culture. It’s a pioneering exploration of Baijiu internationalization in the new era.

In 2022, The internationalization of Fenjiu will continue

The collision, exchange and fusion of Hainan and Fenjiu have a special resonance.

From the Hainan Special Economic Zone to the Hainan Pilot Free Trade Zone, Hainan has always been a pioneer and a leader in reform. While in Baijiu industry, Fenjiu is the pioneer of reform. From the first stock of Baijiu, to Shanxi Province state-owned enterprise reform pilot, Fenjiu has been flashing the glory of reform in its development.

In addition to the strong resonance on spirit and culture of reform, internationalization also closely links Hainan and Fenjiu.

Hainan was at the forefront of China’s opening to the world. As early as the Han and Tang dynasties, Hainan was the only place on the Maritime Silk Road and played an important role in world trade. In the late Qing Dynasty, with the development of The Southern Ocean, Hainan developed rapidly with its special geographical position in Southeast Asia, and had close business contacts with Southeast Asia and many developed regions in the world. More than a dozen developed countries and regions set up consulates in Haikou.

Fenjiu, as a model of national industry, crossed the ocean in 1915 and won the highest honor of the Panama World Exposition Medallion, opening a century of international history and becoming an important representative of the connection between Baijiu and the world market.

In recent years, Fenjiu’s national market has been opened, and the markets outside the Shanxi province represented by Yangtze River Delta and Pearl River Delta have performed well. In 2021, Fenjiu’s market in south of the Yangtze River will grow by more than 60% on average. Yuan Qingmao, the party secretary and chairman of Fenjiu Group, pointed out that Fenjiu should move to a better structure, better efficiency and higher quality, which should “focus on the optimization of market structure, seize the market heights of the Yangtze River Delta and Pearl River Delta, and consider the internationalization and national layout of Fenjiu integrally”.

Hainan is the highland that Fenjiu must seize for the Pearl River Delta market, and the bridgehead for Fenjiu to continue to develop overseas markets and continuously improve the international brand image of Fenjiu.

In 2021, Shanxi Xinghuacun Fenjiu International Trade Co., Ltd. set up an office in Hainan. This indicates that Fenjiu will have a greater breakthrough in the international market in 2022.